Solar cooking systems have been developed in many diverse forms ranging from hot box ovens to focusing dish cookers. Hotbox oven systems have been widely accepted in India and other countries where there is a shortage of energy and pressure on LPG, Coal, Natural Gas, and biomass resources.

Solar cookers in which the cooking pot is placed at the focus of a concentrating mirror have not been widely adopted due to the need to continually adjust the orientation of the concentrator. Hot box ovens and concentrating solar cookers are cheap and effective; however they are limited to cooking during clear sky periods and require the cook to work outdoors.

For a solar cooking system to be adopted in kitchen the following objectives need to be satisfied. 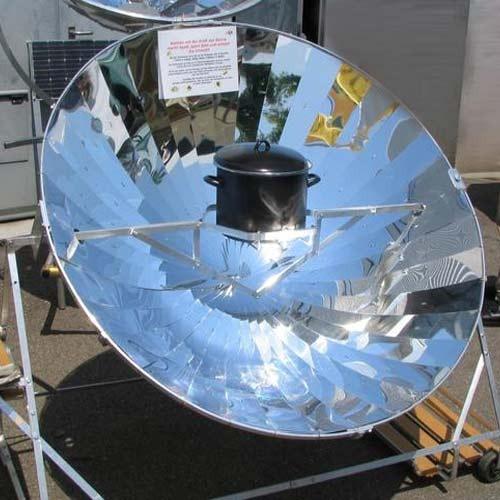 Being pioneer in Solar Cooking and with the Vision to fulfill the daily basic needs of every individual we are one of the leading manufacturer of all range of Solar Cookers. We have in house Manufacturing of Solar Box cookers for domestic use as well as bigger community uses. Our Solar Cookers are working successfully all over the world and we are developing our network world wide to reach to every single person to fulfill their cooking needs.

Ideal For cooking of small family with 4-5 persons, Easy to use, Maintenance free and Unattended cooking. Slower cooking helps in making healthier food compare to LPG & kerosene stove. Average Indian city can have 250 Sunny days if used two times per day will save 2LPG cylinder per year. Designed as per BIS std. Can be used for Boiling, Baking and drying of domestic needs.

Dish-type cookers have a large parabolic reflector that concentrates the Sun’s rays at a focal point where a pressure cooker is place. The parabolic dish is held by a large steel frame, which enables the reflector to track the sun.

Other technologies include dish-type, Arun and indirect solar cookers. The Arun technology incorporates a ‘Fresnel parabolic’ mirror that works in the same way as a dish. It also has the unique capability of automatically tracking the Sun in the sky for absorbing the maximum sunlight possible. Indirect solar cookers have reflectors that heat a pipeline of water and this water is routed around a box containing the food. The food takes up the heat from the pipe and gets cooked slowly.

Looking an Adequate Solution for your Company?

Contact us today for free conslutaion or more information.